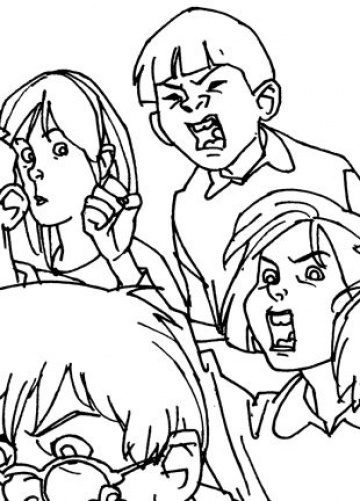 We hadn´t problems with censorship in many occasions throughout the four years the production lasted. I remember two referred to characters and one referred to weapons. The 4th image in this gallery matches a biker´s girl. The whole group appeared as incidental characters in one of the first chapters. I spent two days covering the neckline of the bikini, lengthening the trousers a bit, not that much, a little less, not so chaste... I even don´t know if this is the version in the animation or one of the intermediate ones.

From time to time -I know it is not original at all- I introduced teammates as supporting or incidental characters. In the image 11, the wedding picture; the groom is Frank Paur, one of the executive producers and director of some of the episodes. He had directed some episodes of the Batman of Bruce Tim that is so admired.

The last two images were "cameos" -I guess they are recognizable.