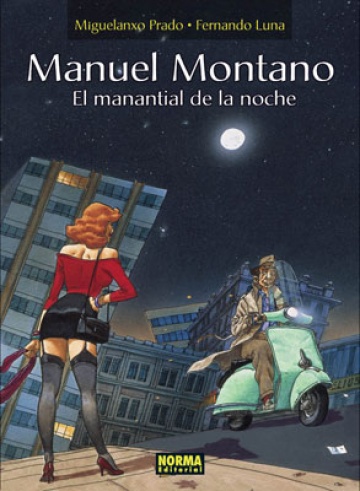 I had been making comics for 7 years, always with my own scripts (but for the beginner short collaboration with Tino Fernández Maceiras in Los Compañeros de la Orden de la Piedra.) And I wondered if that was a personal "pure " option or if, maybe, it was disguising an inability to tell through images other´s stories. And I decided to have a try. I had been listening to Tris, tras, tres, an unclassifiable night program of the mythical Radio 3 from the end of the 80s by Carlos Faraco and Fernando Luna; since my architecture student days. There were some tiny touches, short stories; some of which were starred by Manuel Montano, a bizarre detective, and his group of friends and known people from the underworld. I was at an advantage, as, without realizing myself, I had been developing a version of the character and his world in my head throughout all those years. One night at 3 AM, once the program had finished, I called and proposed Fernando Luna, Nano, to turn Montano and his mates into characters of a comic. It was a funny and fluent collaboration. The result was this book, and a long and close friendship.