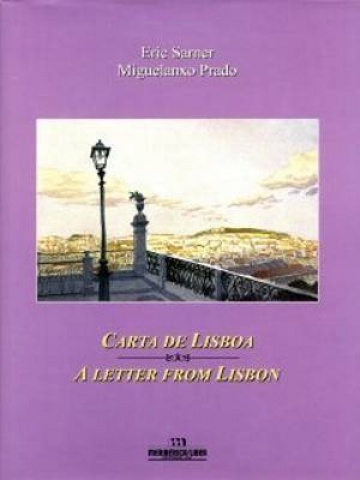 "A letter from Lisbon"

This book, made in collaboration with the writer Eric Sarner, has so far been only edited in French (original edition: Une lettre trouvée à Lisbonne) and in bilingual editions Portuguese - French / Spanish - English under the titles Carta de Lisboa and A letter from Lisbon. Any of them is nowadays very difficult to be found.

Both Eric and I had known Lisbon for some time then and agreed a simple work methodology: throughout the fortnight that our staying was going to last, we would tour together all over the city and take notes. But we would share them at no time, so that one´s view was not conditioned by the other´s one. And that´s the way we did it. There were only two clear violations of the agreement. The first one was that, in two or three days time, we both noticed that Lisbon is full of subtle animal references. It was clear that that thread would appear on the text and images. And the second one was an outstanding event related to a picture that was found in an implausible place by chance. It was impossible not to make any comment and draw up a common story around that find.