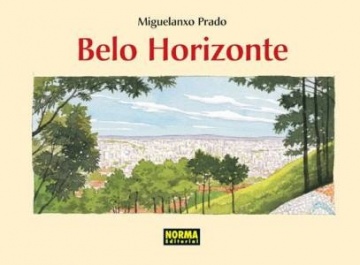 "Three reasons led me to Belo Horizonte. The first one, the explicit promise of its name. The second one, the wage rise due to the movement. The third one, my conviction that this trip would mean a turning point in my tedious mining technical engineers life, anchored in a middle job, in the gray offices of a multinational of the sector."

In 2001, I was proposed to make a book about Belo Horizonte by the Brazilian publishing company Casa 21 together with the participation of the Prefeitura (council) of the city. One of the Jano´s books about Rio de Janeiro had been recently edited in those days.

I didn´t want to make a "card book." And I proposed to develop a story whose scenario was the city; so as to make the reader feel, once the story is over, that Belo Horizonte is actually the main character. As it happens in many of the Woody Allen con Manhatan, bridging the distances.

Extract from the text