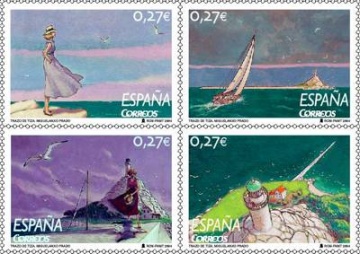 Postage stamps of "Streak of chalk"

In 2004, the Spanish Post Office proposed me to produce a print run of stamps with images from Streak of chalk. The issue consisted of 16 stamps, twelve of them with no postal value. The print run included one million copies (the biggest print run I have produced ever!) And, as I was reported; it was sold out in little time (nothing praiseworthy, on the other hand, since it happens with nearly every publication.)

I thought I was going to get loads of letters with those stamps... I just got two letters. It is true that most of the mail I get is from banks, and they do not use stamps.